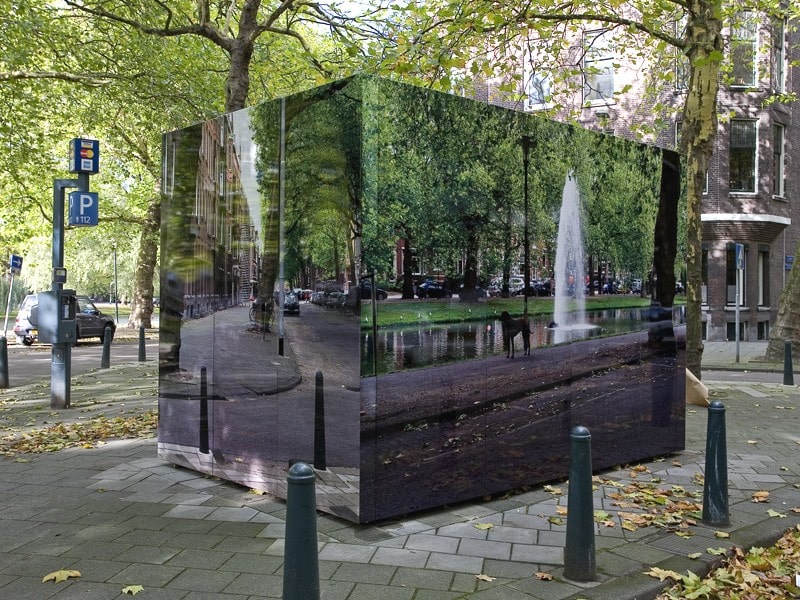 Imagine first some ripples on a pond. Fig 1 If I start my ripples by disturbing the water at just one point near one side, they would spread as out as semi circles. If I make more waves starting from a place close by to the first source, the waves will spread out from this second point and as the waves cross over each other they make a characteristic pattern called interference. It is a misleading name as they interact in a very orderly way. Visual artists familiar with op art may remember something called the moiré pattern. If you overlay two parallels sets of lines, or concentric arcs of circles in this case, the lines produce strong fringes where they overlay each other. The waves do the same thing: where two peaks of a wave meet they reinforce, where a peak meets a trough they cancel out. If you do an experiment with light waves which are microscopically small and pass them through two narrow slits, interference patterns form and are visible to the naked eye since they can be much larger than the waves that produced them. It takes a little care to set the experiment up so that the pattern is large enough to see but it is fairly easy using a laser. If we put a screen behind the double slit for the light to fall on, then we would see a series of fringes as shown in fig 2.

Speaking about that work, the artist said: “There is repetition, chemical reaction, reproduction, formation, and vitality; but the existence of a system is uncertain.” In other words, most of the action takes place with limited, if any, control by the artist. Growing moss is welcomed here, even encouraged. And as a matter of fact, the Paris show is itself basically “growing” on another representation – the rails and remains of the Mike Kelley exhibition that was in the gallery immediately before Huyghe’s retrospective. This self-generating world is conceived to vary in time and space, almost indifferent to human presence, past and present; and the unregulated nature of such an experiment is meant to generate unfixed narratives and “breathing” monuments actually, it all operates as the opposite of a monument, since the works, rather than representing a firm statement, are subject to continuous shifts between different resolutions, releasing and receiving in a state of permanent osmosis. Huyghe is more interested in transitions than conclusions; he ’s looking at the stops along the railroad rather than the final destination, inquiring into the dynamic chain of events rather then the epilogue. And some of these events are so temporal that they literally fade or melt away over time, like the ship made out of ice that the artist placed in the Kunsthaus Bregenz as part of his “L’Expedition Scintillante: A Musical,” in 2002.