Source: {BLACK. WHITE. YELLOW.}: I HEART Envelope Security Patterns…How Could You Not!? 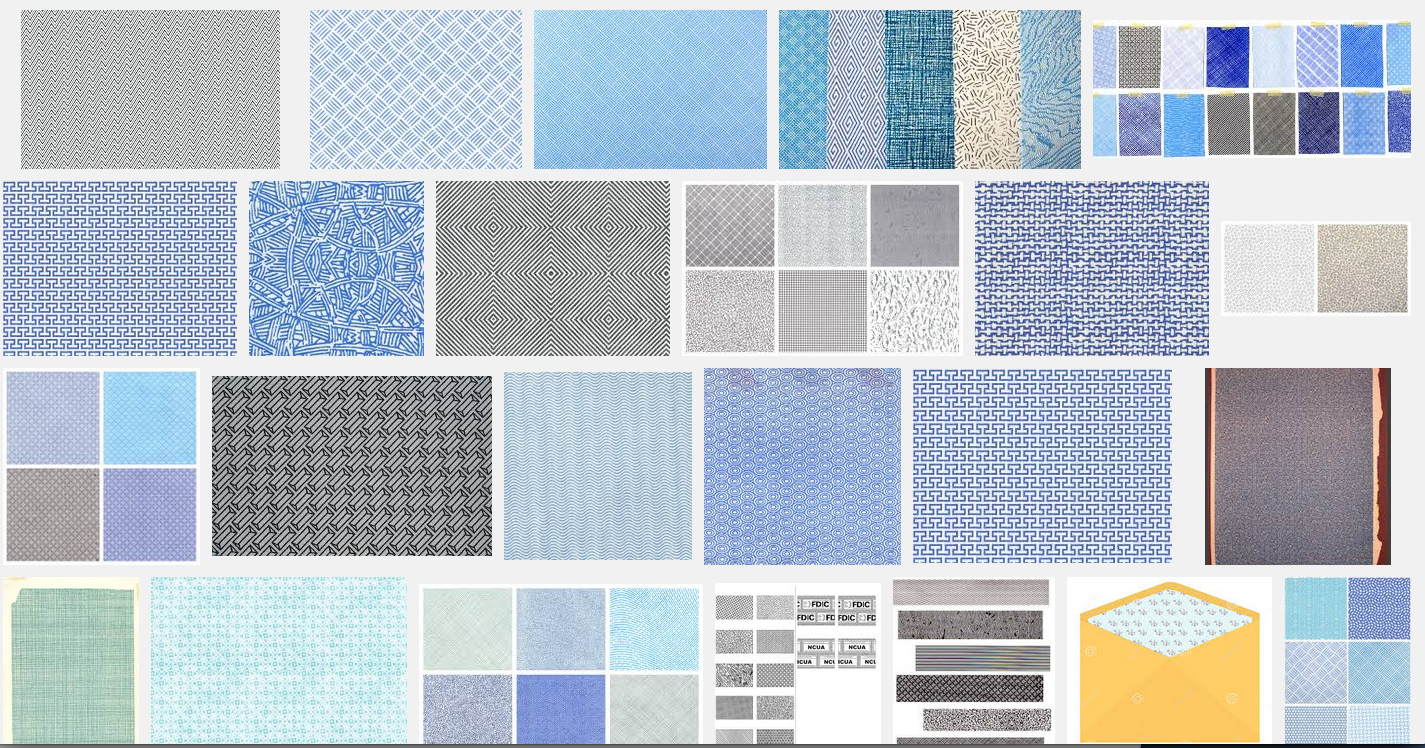 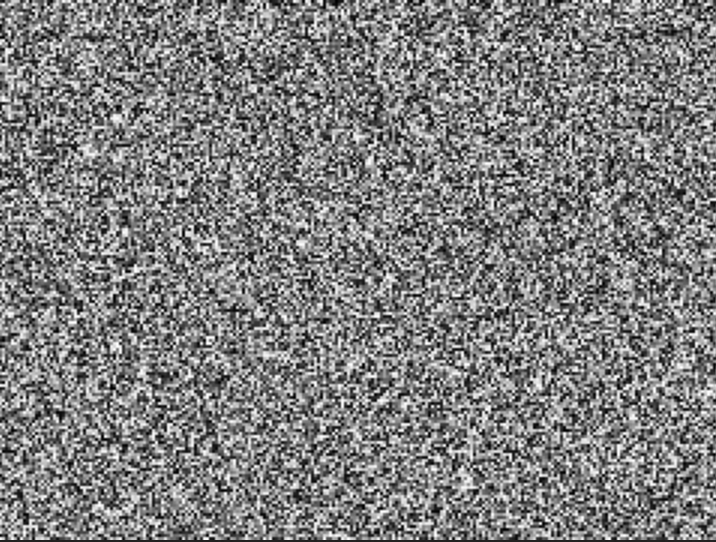 In signal processing, white noise is a random signal with a constant power spectral density.[1] The term is used, with this or similar meanings, in many scientific and technical disciplines, including physics, acoustic engineering, telecommunications, statistical forecasting, and many more. White noise refers to a statistical model for signals and signal sources, rather than to any specific signal.A “white noise” image.In discrete time, white noise is a discrete signal whose samples are regarded as a sequence of serially uncorrelated random variables with zero mean and finite variance; a single realization of white noise is a random shock. Depending on the context, one may also require that the samples be independent and have the same probability distribution (in other words i.i.d is a simplest representative of the white noise). In particular, if each sample has a normal distribution with zero mean, the signal is said to be Gaussian white noise.[2]The samples of a white noise signal may be sequential in time, or arranged along one or more spatial dimensions. In digital image processing, the pixels of a white noise image are typically arranged in a rectangular grid, and are assumed to be independent random variables with uniform probability distribution over some interval. The concept can be defined also for signals spread over more complicated domains, such as a sphere or a torus.0:00Some “white noise” sound.An infinite-bandwidth white noise signal is a purely theoretical construction. The bandwidth of white noise is limited in practice by the mechanism of noise generation, by the transmission medium and by finite observation capabilities. Thus, a random signal is considered “white noise” if it is observed to have a flat spectrum over the range of frequencies that is relevant to the context. For an audio signal, for example, the relevant range is the band of audible sound frequencies, between 20 and 20,000 Hz. Such a signal is heard as a hissing sound, resembling the /sh/ sound in “ash”. In music and acoustics, the term “white noise” may be used for any signal that has a similar hissing sound.White noise draws its name from white light, although light that appears white generally does not have a flat spectral power density over the visible band.The term white noise is sometimes used in the context of phylogenetically based statistical methods to refer to a lack of phylogenetic pattern in comparative data.[3] It is sometimes used in non technical contexts, in the metaphoric sense of “random talk without meaningful contents”.[4][5] 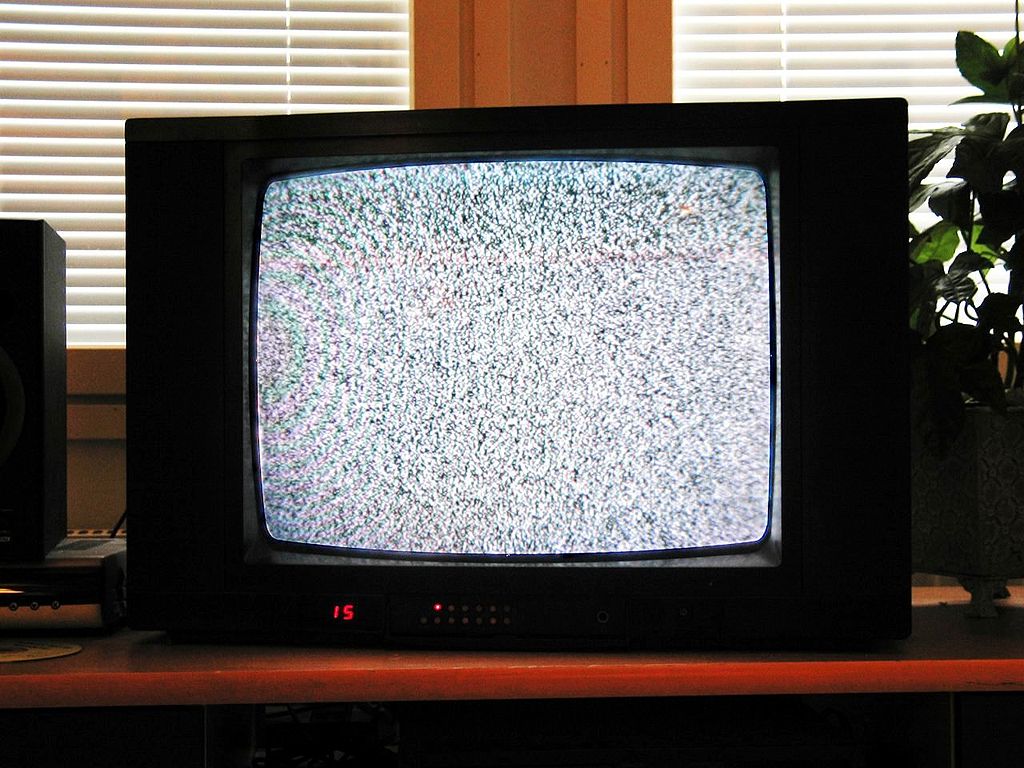 Noise, in analog video and television, is a random dot pixel pattern of static displayed when no transmission signal is obtained by the antenna receiver of television sets and other display devices. The random pattern superimposed on the picture, visible as a random flicker of “dots” or “snow”, is the result of electronic noise and radiated electromagnetic noise accidentally picked up by the antenna. This effect is most commonly seen with analog TV sets or blank VHS tapes.There are many sources of electromagnetic noise which cause the characteristic display patterns of static. Atmospheric sources of noise are the most ubiquitous, and include electromagnetic signals prompted by cosmic microwave background radiation,[1] or more localized radio wave noise from nearby electronic devices.[2]The display device itself is also a source of noise, due in part to thermal noise produced by the inner electronics. Most of this noise comes from the first transistor the antenna is attached to.[2]UK viewers used to see “snow” on black after sign-off, instead of “bugs” on white, a purely technical artifact due to old 405-line British senders using positive rather than the negative video modulation used in Canada, the U.S., and (currently) the UK as well. Since one impression of the “snow” is of fast-flickering black bugs on a white background, in Sweden and Denmark the phenomenon is often called myrornas krig in Swedish, myrekrig in Danish, hangyák háborúja in Hungarian, and semut bertengkar in Indonesian, which translate to “war of the ants” or sometimes hangyafoci in Hungarian which means “ant soccer”, and in Romanian, purici, which translates into “fleas”.Due to the algorithmic functioning of a digital television set’s electronic circuitry and the inherent quantization of its screen, the “snow” seen on digital TV is less random. Most modern televisions automatically change to a blue screen or turn to standby after some time if static is present. 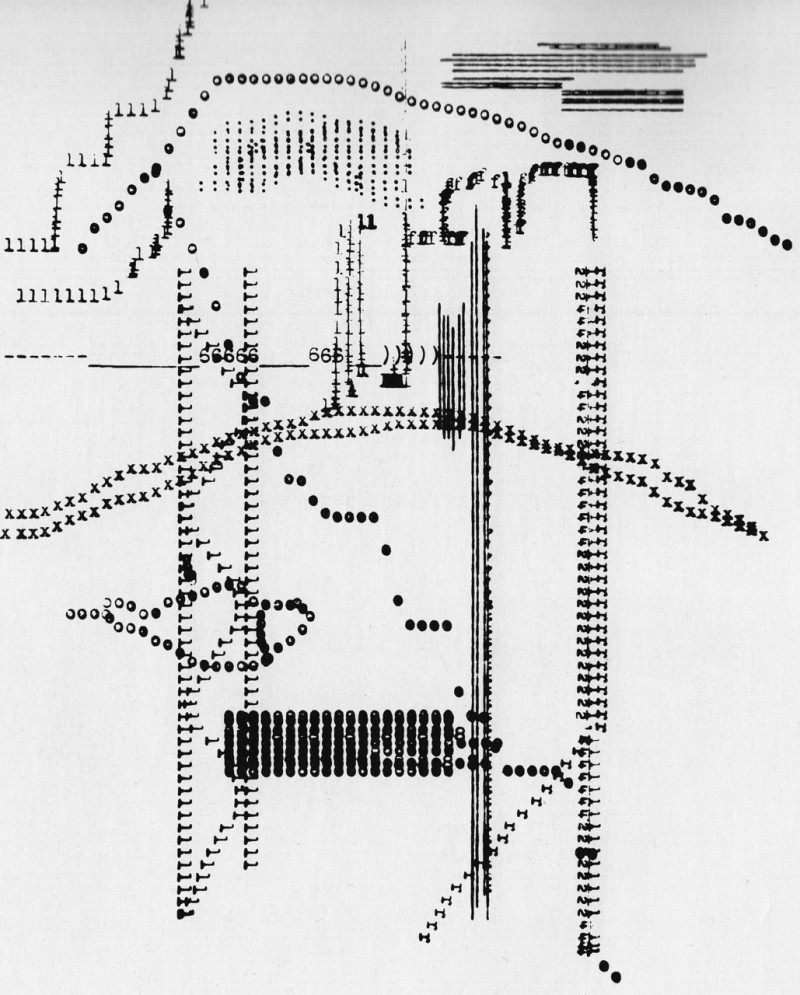 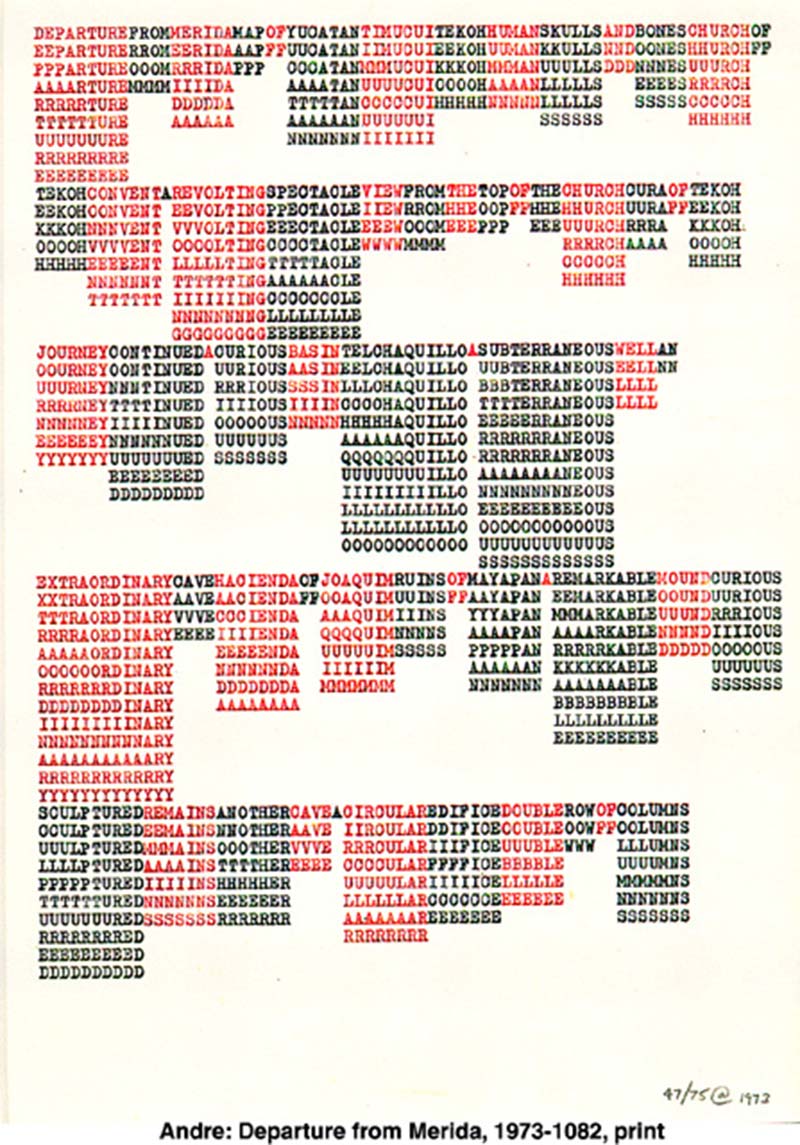 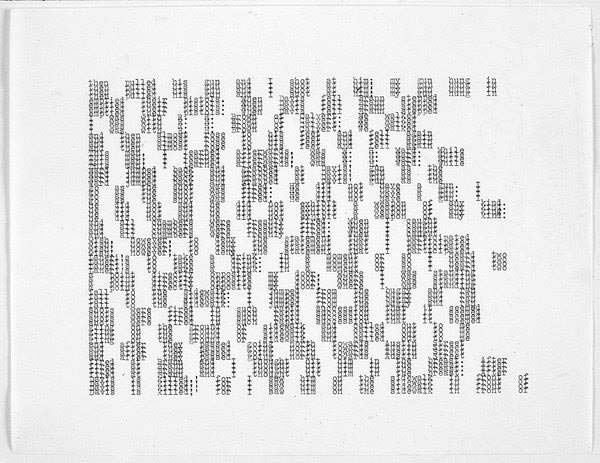 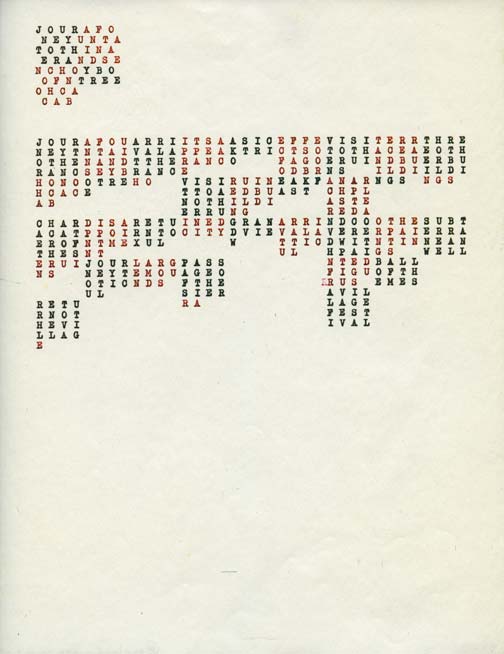 I have used the typewriter as a machine or lathe or saw to apply letters on the page. I really do feel very tactile using the typewriter. I never learned to use a typewriter automatically. I can still only type with one finger, but that made each operation of typing a very machine-like act. It was like actually embossing or applyng physical impressions on to a page, almost as if I had a chisel and was making a cut or a dye and making a mark on metal.” 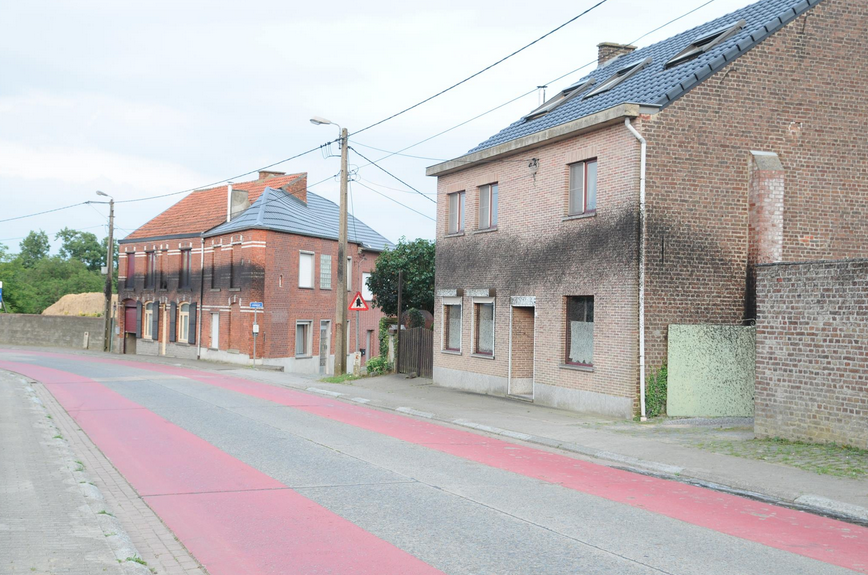 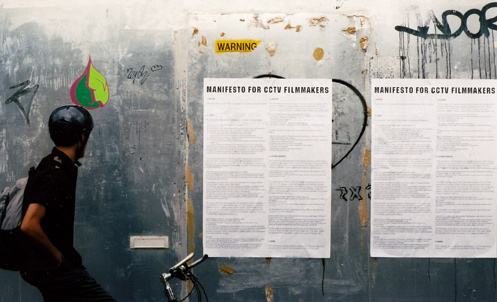 MANIFESTO FOR CCTV FILMMAKERS declares a set of rules, establishes effective procedures, and identifies further issues for filmmakers using pre-existing CCTV (surveillance) systems as a medium in the UK. The manifesto is constructed with reference to the Data Protection Act 1998 and related privacy legislation that gives the subjects of data records (including CCTV footage) access to copies of the data. The filmmaker’s standard equipment is thus redundant; indeed, its use is prohibited. The manifesto can easily be adapted for different jurisdictions.